The Swedish innovation model is based on the idea that promising research and business ideas at, for example, universities and research parks grow, create jobs, and in the long run secure our welfare. This growth model is supported by several forms of business policy and funding. The model was the basis for the previous government's national innovation strategy, and nothing substantial has changed since then.

With imagery from agriculture, one can call this innovation model a 'Seed Model', and say that our Industrial policy is one of its most significant water resources. Leading politicians and representatives of the Swedish innovation system think that we through supporting start-ups today can create tomorrow's Electrolux, Aga, Ericsson, and Alfa Laval. These new companies will then finance a significant part of our future welfare. Many people have witnessed that we in Sweden have high research expertise, but are not so good at converting the results into growing companies.

A Transformation model for more welfare 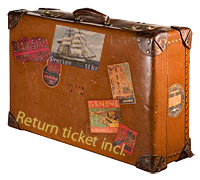 The Transformation model is a concept and strategy that complements the dominant 'Seed model' for more jobs and more welfare. The Transformation model says that our future prosperity is fundamentally more dependent on our collective power for change and transformation than ideas and start-ups from Swedish universities and research parks. This by no means belittles all their achievements.

Perhaps the well-known 80/20 rule can be used. Assume that 80% of our future welfare should come from many different sources and have a broader origin than the growth of, and in, small Swedish innovation companies.

Sweden is a small country, and most innovations are developed elsewhere. We should be better at discovering, acquiring knowledge, products, and working methods or in other words, learn things from wherever in the world they come. In short, transformation. This applies to all companies and organisations in the private as well as in the public sectors.

In 2004, I wrote about this in Sweden's largest tech journal Ny Teknik↗ 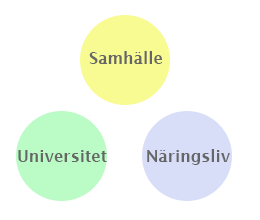 and Google Scholar↗ - for collaboration between academia, society, and business is often depicted as three - slightly overlapping - circles.

Is this a good model, and if so, to what extent?

The role and future of the Swedish universities and colleges

The image with three equal circles is certainly symbolic, but it gives an incorrect picture of reality. Society and industry are increasingly gathering research results and knowledge from the whole world. 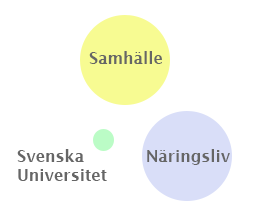 The role of Swedish universities and colleges is relatively small and will in the future most likely be even smaller.

Universities and colleges are also slowly entering a new digital world that is rapidly developing. You mainly make a career in the academic world by researching and producing original results. However, since almost all research (about 99%) is done in countries other than Sweden, we need people who are competent to understand these new results developed elsewhere. The sooner these, in a suitable form, are adapted and implemented in Swedish organisations and companies probably the better.

Sadly, this type of work has as little value in the academic world, whatever the university representatives say. The discussion about the role of universities and colleges will increase. My conclusion is that universities in their current form will become less important and that new organisations will emerge. MOOC's↗ enW and Kahn Academy↗ are two fascinating examples. The universities will also face disruptive changes, even though they probably do not believe so.

The government's innovation strategy contains a hefty dose of newspeak about Innovative people // Objective: People have the ability, the will, and the conditions to contribute to innovation. (pages 22 and 23). No, this and many similar wordings are probably not the experience of most innovators. Innovations almost always encounter disinterest and / or fierce resistance. Innovations depend on and are driven by small dedicated groups. Sometimes even by unique persons. Read more about Yes, but ... The question of language and symbol images are compelling.

If we could agree that only a small part of Sweden's future welfare depends on Swedish innovations, and primarily on everyone's ability to change and transform, it is logical that a national transformation model should complement our national innovation strategy.

As the pace of change is driven up in society, many losers and people who experience increased rootlessness are created. The educational challenge is growing in importance, and we need to find more and better ways to make sense - and ways of finding meaning - and to support change. We need new arenas to clarify, and make sense if possible, of what is happening now and in our future.

At best, those who lose their jobs, their local service, or have outdated skills are only temporary losers. Some may find a new and acceptable life situation thanks to their own energy, relatives, friends, and public action. Incidentally, you always make small mini gains and mini losses when most changes occur. Being able to pay bills via the internet in the middle of the night is for many a mini gain, for others, it is a mini loss that a neighborhood shop closes.

How to measure Transformation?

You can measure transformation in many areas, for example, where people live and how far - in kilometers (miles), time or effort - people must travel to a basic service. It is also possible to measure the presence and perhaps the distribution of many capital goods and services.

But what might also need to be measured - however one could do that - is people's, and organisations readiness for transformation. If change means that, in significant respects, you feel that you are losing, then you are obviously less attracted to change. Change also has a cost. Several scientific studies show that too much change leads to physical illness. Thus, one must - to the extent possible - choose one's changes.

The Swedish government can allocate a number of billions to the growth ecosystem organisations - like Vinnova, and Tillväxtverket - to support growth in certain areas. There are undoubtedly ongoing evaluations of these efforts, although the results have been questioned. If the assignment were expanded to include more of Transformation, other work methods would be needed.