Mental maps are about how you look at the world, yourself, and others. We have mental maps of almost everything, but they are not always good guides. 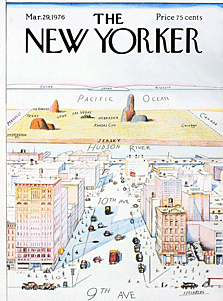 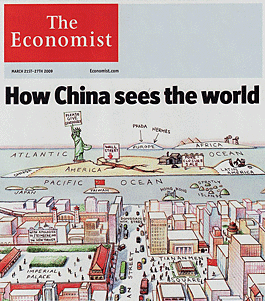 Images and a thousand words

The famous picture View of the World from 9th Avenue, (1976) of how a person in New York views the world was drawn by the American artist Saul Steinberg. Many of his works were published in the journal 'The New Yorker', widely known for its cartoons.

We have mental pictures of an incredible number of things. Sometimes these are called prejudices when it's really more about preconceived and often simplified images. It becomes prejudice when someone does not want to change their view when facts are pointing in a different direction.

In a large company I worked for, the CEO said "The less I have to do with the blue color union, the better". The union expected nothing but negative messages. They were locked in a vicious circle. The company's profitability was low.

Corporate management in the American book chain Borders paid Amazon.com to run its e-commerce business. They didn't see any future in e-commerce. Today Borders is history.

Nokia couldn't imagine that Apple's ONE phone could threaten its huge and successful business. At that time, Nokia had close to a 40% share of the world market for mobile phones. From there on it went downhill towards a shameful ending. The list can be made very long on how one's mental map controls what questions one asks and how one constructs one's reality.

Mental maps are not frozen in time, although some kind of crisis or upheaval is usually required to initiate a change.